Cool Creek Park in Carmel, IN was purchased in 1975 with the assistance of Mr. Edward McMahon and consisted of 90 acres. Cool Creek Park is an attractive, natural area along Cool Creek that was planned for development as the first major "County Park" with bicycle trails, hiking trails, nature center, camping, and open play areas.


The park officially opened to the public in July 22, 1990. Following the park opening, some of the common yearly activities of the park included the Haunted Trails which started in 1992, the summer  nature programs, that began in 1993, and concert series that started in 1994. Amenities were added to the park including the Cool Creek Music Pavilion (1994), Administrative Offices (1994), Cool Creek Prairie (1995), the Cool Creek Nature Center (1997), and greenhouse (2001).

Along with the other features of the park, seeding for the Cool Creek Prairie began in May of 1995. The prairie was planted through a grant from IPALCO Enterprises, Inc. The prairie consists of native Indiana plants such as little bluestem, compass plant, and purple coneflower.

Inside the nature center there is the Edward "Ted" Wildlife Viewing Area which has a windowed area for viewing of birds and wildlife at bird feeders. The viewing area is named in memory of Ted who led the parks department's bird walks and was named the 1993 Volunteer of the Year.

The Cool Creek Nature Center installed a 15,680 watt solar photovoltaic array consisting of 64 245-watt solar modules. This PV system was completed in 2010 and it provided and excellent example of the most current installation practices for medium-sized roof mounted installations. 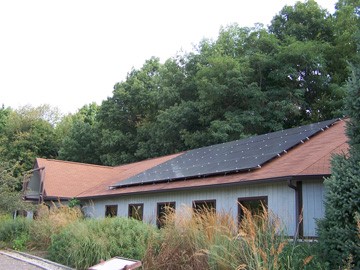